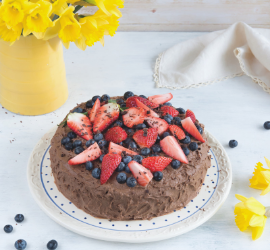 For the buttercream frosting:

Heat the oven to 180 °C. Butter and flour a 20 cm cake tin. Measure out all the ingredients.

In a large bowl, cream the butter with the sugar until pale and frothy. Add the egg yolks, one by one. Beat well to get lots of air into the mixture. In a separate bowl beat the egg whites until stiff, and gently fold into the mixture with a rubber spatula. Finally, sift the cacao powder, flour and baking powder into the batter and mix until combined. Do not over-mix it at this stage, just until the dry ingredients are combined well with the egg mixture. Pour the batter into the cake tin and bake it in the oven for about 40 mins, until a skewer inserted into the middle comes out clean. Allow to cool in the tin for 15 minutes before turning out onto a wire rack.

In a saucepan, stir the chocolate over hot water until melted into a very smooth cream. Remove chocolate from the steam (careful, steam can be very hot!) and gradually add the double cream to the chocolate until it thickens. Let it cool to room temperature then whisk it with an electric mixer until you get a lighter, creamy texture.

Heat the milk in a medium saucepan, turn down the heat before it starts boiling. In a separate bowl, mix the egg yolks with the sugar and the corn flour. Optionally, add the coffee to the mixture, which will bring out the chocolate flavour.

Gradually, pour the egg mixture into the milk over low heat, and stir frequently until you get a thick cream. Stir in the chopped chocolate until it has all melted and mixture is smooth. Remove from the heat, cover the surface directly with cling film to prevent a skin from forming and set aside. When cooled down, cream the butter in a separate bowl and add this chocolate cream. Whisk until you get a frothy mixture.

Fill and cover the cake:

All ingredients are ready and at room temperature, so let’s put the cake together.

Divide the ganache into 2, same amount for each layer. Cut the cake into three even layers. Place the first layer on a thin cake board or directly on a cake stand. Spread the filling in an even layer using a spatula. Stack the next layer and spread the other half of the ganache. Place the last layer of cake on top.

Cover the cake with the buttercream frosting. You can play around with the decoration, doing some patterns on the side of the cake with a spatula, then decorate the cake with plenty of fruit of your choice. We have used a box of blueberries and strawberries but you can use other seasonal fruits instead.

Tip: Let it rest in the fridge for couple of hours then serve it at room temperature. 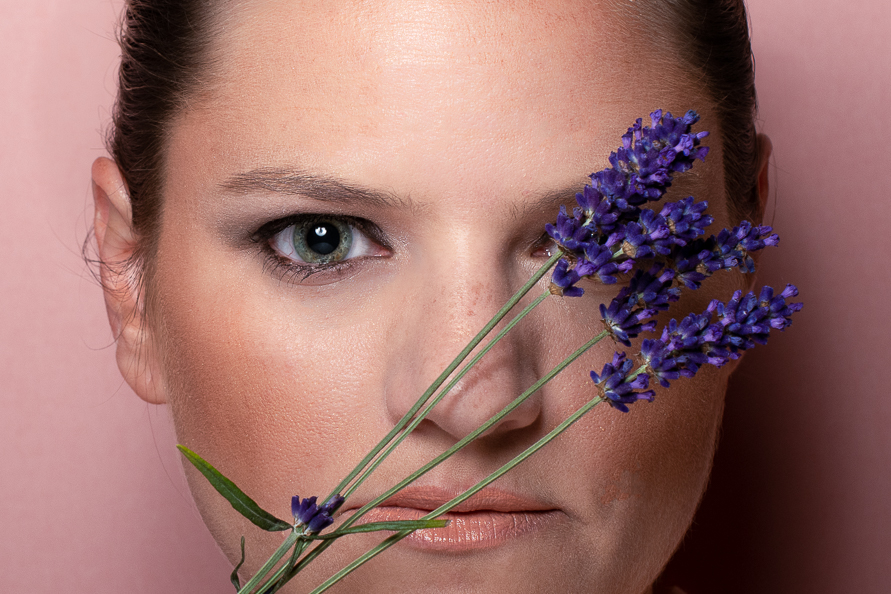 This is Aggie, a freelance food stylist, photographer and recipe developer based in Dublin.
I would like to share my passion with you so this blog will be all about food, food, food. How I create it, how I style and shoot it.
Please join me!
With Love,
Aggie x